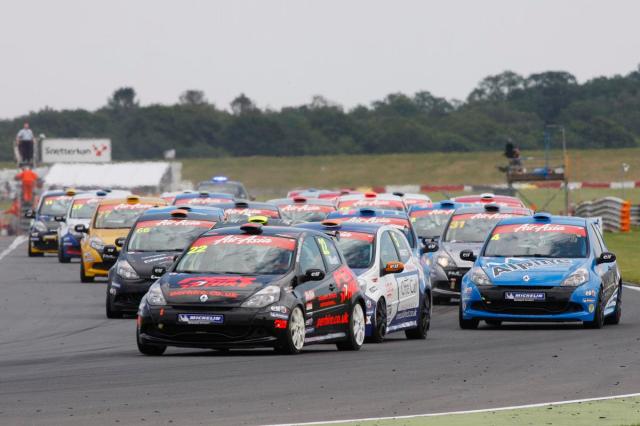 Paul Rivett continued to close the gap between himself and Jack Goff at the top of the championship winning round ten of the AirAsia Renault UK Clio Cup at the 2.9 mile Snetterton 300 circuit.

Rivett (Banstead) again lined up behind title rival and pole sitter Goff (High Wycombe) and was looking to replicate yesterday’s race victory. As the lights went out, the PER HIRE Stancombe Vehicle Engineering driver got a perfect start taking the lead as the 24 car grid headed down into turn one. With clean air and no one in front of him, it was a familiar sight for the already three-time race winner this season who produced a flawless ten lap race to take to the top step of the podium for the second time this weekend.

‘It’s been a great weekend,’ said a delighted Rivett. ‘Two wins, two perfect races. I’ve just got to continue that on now. If it weren’t for our two DNFs earlier in the season we would be in the lead by a country mile by now. One of them being my fault and the other was just one of those things with a car failure. I still feel we are the car to beat out there and that has to continue for the rest of the year now in order to put Jack under some pressure.’

‘Stefan kept the pressure on me in that one,’ continued Rivett. ‘But it’s always nice to take double victory, which is what we wanted. One of my little demons is struggling to get off the line well, but I certainly didn’t have any problems with that today. Watch this space.’

Having also secured a podium yesterday and having been competitive all weekend, KX Academy sponsored driver and recent returnee to the championship, Stefan Hodgetts (Redditch) continually pressured Rivett after jumping ahead of Goff at the start from third, but had to settle for the second step of the podium, one step better than yesterday’s third place. Since his return to the AirAsia Renault UK Clio Cup back in June at Oulton Park, Hodgetts has been on the podium for all four races.

‘We started third and we got a second,’ said Hodgetts. ‘I’ve only raced two meetings prior to coming here so to get four podiums out of four, it’s going well. I just wish the championship started at Oulton Park as I’d probably be leading it.’

‘Scuderia Vittoria have given me a fantastic car but if we can just get qualifying right and if we were at the front it may have been a different story. It’s always good fun racing Paul (Rivett) as he’s a class act who didn’t make any mistakes so I was never going to get past.’

Bringing the car home in third place and ahead of teammate Goff was Team Pyro’s Adam Bonham (Kibworth). Having already secured four podiums and a pole position this year, the 18-year old, who is still looking for first race victory, was delighted with today’s return to the podium.

‘It was a good race for me,’ said Bonham. ‘We got a bit of a bad start, but an ok first lap having started in fourth place and I was just hunting down Jack Goff, but by the time I got past him the leaders were already gone. I’m happy with third as it was the best we could have done.’

‘I’m happy to be back on the podium as it’s been a while, having not been there at Oulton Park because we had a bad qualifying session and I had some back luck at Thruxton, so it’s great to be back up there.’

In usual Clio Cup fashion, the midfield never fails to deliver action packed racing. It was yesterday’s Rookie Cup winner Josh Cook (Bath) to first fall victim as he was only able to complete one lap before having to retire due to contact with today’s trophy winner Aaron Williamson (Holbeach).

Having been involved with exciting wheel-to-wheel racing with both local racer Josh Files (Norwich) and Thruxton double winner James Colburn (Worthing), Williamson was able to bring the slightly battered Clio home in sixth place to his and the Finesse Motorsport Ltd teams delight.

‘It was good, but hard work,’ expressed Williamson. ‘It was the toughest Clio race I’ve ever had in terms of traffic and being bumped, but then again that’s tin top racing. I’m happy to be back on the podium, obviously I wish it was on the overall podium other than just top Rookie like back at Brands Hatch, but we are definitely making some progress. We’ve come back from the big break focused and we’ve got where we needed to be.’

Elsewhere, Scotsman Finlay Crocker (West Lothian) regained the second spot from Darren Wilson (Newark) in the ELF Masters Cup after having a straightforward race bringing the car home in 12th place, narrowly missing out on a top ten finish.

‘Yesterday was a fiasco so today was a complete different mind set,’ said Crocker. ‘I wasn’t quite on the pace as the guys in front and I didn’t want to make any mistakes as I had made too many yesterday, so it was just score some points and hope people in front went off. Overall, it worked out alright.’

‘Throughout the race there was nobody immediately in front of me or immediately behind so keeping concentration as you go round and round was pretty hard.’

After impressing on his Clio debut yesterday, David Grady (Leicester) was unable to bring home some points as contact between him and Total Control Racing’s Rob Smith (Telford) ended both of their weekends on lap three.

Drivers’ Championship after Round 10:

Entrants’ Trophy after Round 10:

A full set of timing results and championship standings can be found here: www.tsl-timing.com

Press images of the Renault Clio Cup UK can be downloaded from: www.jakobebrey.com/renault

Each season drivers come from around the United Kingdom and internationally to compete in the thrilling wheel-to-wheel racing that the Renault Clio Cup demands. The Championship continues to be the UK’s premier one-make saloon-car championship. Using race cars based on the road-going Clio Renault Sport 200, the Championship continues to be a breeding ground for future Touring Car drivers. As a prominent support race on the British Touring Car Championship platform and benefiting from live, comprehensive and new for 2011, HD TV coverage on the ITV sport network, it remains the most direct link to the BTCC. Almost one third of the current BTCC grid graduated from the ranks of Renault Clio Cup UK http://www.renaultsport.co.uk/championships/cliocup/Default.aspx
View all posts by AirAsia Clio Cup →
This entry was posted in Uncategorized. Bookmark the permalink.